How the Assisi Loop helps dogs with IVDD 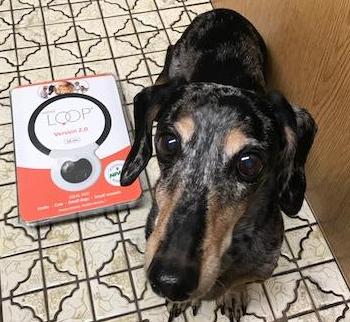 There are a few treatments for IVDD, but none are guaranteed to fix the problem. Crate rest, steroids, non-steroidal anti-inflammatory drugs, muscle relaxers and alternative treatments like cold laser and acupuncture have long been in vets' arsenals when treating IVDD; some pets with severely damaged discs are also candidates for hemi-laminectomy surgery. Increasingly, however, some vets are turning to a non-pharmaceutical anti-inflammatory device (NPAID®), the Assisi Loop®.

The Loop uses targeted pulsed electromagnetic field therapy to catalyze the body's own response to injury, the nitric oxide cycle, to stimulate healing and reduce pain. Rather than masking the pain like a painkiller, or physically altering the body like surgery, the Assisi Loop encourages the body to heal itself. A good option for pets who have sensitivities to medications or are not candidates for surgery, the Loop is a non-invasive option. Of course, sometimes surgery is inevitable; in these cases too, however, the Loop has been shown to greatly reduce pain and edema (swelling) and increase healing at surgical sites.

Many cases of animals being treated for IVDD come across Assisi Animal Health's desk each year (it seems we talk to a disproportionate number of dachshund owners). Those who love them know them as spunky, spritely dogs, but their energy levels can often be out of step with their physical capabilities.

Such is the case with Oscar, a silver dapple dachshund owned by Stacy Twigg of Las Vegas, Nevada. As much as Stacy tries to limit his jumping, she says, it's almost impossible to keep her active dog at a reasonable activity level. " I noticed he would moan a lot, even while lying down, just to move slightly," Stacy writes. "I knew it was his back bothering him.

In August 2017, Stacy consulted with Daniel M Ulitchny, DVM, at Sahara Pines Animal Hospital in Las Vegas. A dachshund owner himself, Dr. Ulitchny noted that while he had minimal orthopedic degenerative changes, Oscar had "significant and consistent pain response with thoraco-lumbar spinal palpation." Dr. Ulitchny recommended the NSAID Metacam, and while it certainly helped initially, Stacy didn't want to keep giving it to him long-term for fear of typical problems associated with extended NSAID use (ulcers, liver toxicity) - but when Oscar was tapered off the medication, his pain symptoms returned.

Stacy learned of the Assisi Loop and, after bringing information about it to Dr. Ulitchny in October, he agreed that it was worth a try. They stopped NSAIDs altogether and proceeded with only the Assisi Loop. "On our recheck exam on November 27," Dr. Ulitchny writes in his case report, "Oscar had been off NSAID therapy for nearly a month and maintained on Assisi Loop therapy alone. Oscar's pain was minimal with thoraco-lumbar palpation.  His gait was normal and he displayed increased ability to go up steep inclines with no hesitations." He continues: "Oscar represented my first case that I was able to follow from the initial presentation with spinal pain through resolution and maintenance aided by Assisi Loop therapy.  Given this experience I would likely consider Assisi Loop therapy as an adjunct and possible a primary therapy modality in the future."

Similarly to Oscar, a dachshund named Charlie, owned by David Nickleski in Illinois, also is an older dog experiencing back pain. Charlie "had stopped going up and down stairs," David writes. "He would just sit on the first step and wait for a family member to carry him up the stairs." After x-rays, he was diagnosed by Dr. Karen Turner at Companion Animal Hospital (Crystal Lake, Illinois) as having IVDD.

On May 30, 2017, David said that "within about a week we noticed that Charlie started going up and down the stairs again, and has routinely gone up two flights of stairs that separate our first and second floor in the house. He had not done that in about two months. We are very pleased with his progress and are hoping that he continues to recover." On April 24, 2017, Charlie began treatment with the Assisi Loop. He's a small dog, so a large Assisi Loop with a diameter of 7.5 inches covered almost his entire back; it was attached to a vets he would wear so he was free to move during treatment. 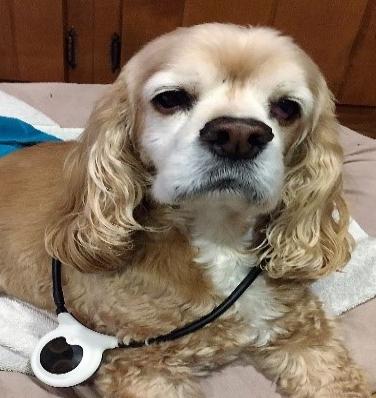 In a different type of case, Puppers, an 11.5-year-old cocker spaniel in New York, underwent hemilaminectomy surgery at the Veterinary Medical Center of NY under the care of Dr. Polly Fleckenstein in 2013. Puppers was deep pain negative (unaware of pain or sensation) and non-ambulatory in his hind end due to IVDD, so surgery was the best option at that time. Unfortunately, despite rehabilitation and constant care, it was determined that even after surgery, Puppers would remain paralysed in his hind end.

To maintain his physical comfort, a case report from Lis Conarton LVT at VMC's CARE Pet Therapy facility says, "Puppers' rehab routine at the Medical Center of NY included laser therapy, massage/soft tissue mobilization, and underwater treadmill to aid in compensatory discomfort and maintain muscle mass in his hind limbs. ... Puppers was fitted for a wheel cart that allowed him and his owner to continue to enjoy daily walks together. Puppers loves to watch wildlife and play in his yard and was able to do so on his own with his wheels."

However, in early 2017, Puppers showed nerve pain in his front left forelimb; his gabapentin dose was adjusted, and tramadol and methocarbamol were added. He also received heat and cold therapy, massage, passive range of motion therapy and his regular supplements (omega-3 fatty acids and duralactin). Despite these efforts, however, Puppers was still exhibiting panting, trembling, increased thirst and restlessness.

Lis says that they decided to administer Assisi Loop treatments in addition to his medications and supplements. "The Loop was used every eight hours over the C4-C5 of his cervical area," she writes. "Within two weeks, Puppers was sleeping through the night and, for the first time in four years since his surgery, laid on his side to rest." She continues: "During rehabilitation at CARE Pet Therapy, it was noted that a greater range of motion and improved comfort performing cervical mobilization was achieved compared to sessions from the two weeks before the Assisi Loop was integrated."

"This is the first university study to demonstrate a positive clinical benefit of an NPAID® (non-pharmaceutical anti-inflammatory device) in the treatment of post-operative Grade V IVDD. The results show undeniably the Loop's ability not only to reduce pain in a severe population, but also to help target neural tissue to recover faster. This speeds the patient's ability to return to more normal function more quickly and suggests that using the Loop should be considered as 'best practice' in surgery and rehab cases, both in hospital and as a take-home therapy." ~Dr. Deirdre Chiaramonte, Veterinary Advisor for Clinical Trials at Assisi Animal Health

Assisi Animal Health appreciates the opportunity to be a part of the circle of care that includes the pet owner, the veterinarian and us. When we can treat an animal in pain, particularly one for whom medication is a less desirable option, there are few feelings better than knowing everyone can get outside and play ball again.

You must be logged in to leave a reply. Login »

Get the
Loop
By filling out this form, you will be added as a subscriber to our newsletter. You may unsubscribe at any time.